After the crisis back to ‘normality’: The Cyprus Presidential Elections 2018

On 4 February 2018, the 8th President of the Republic of Cyprus, the incumbent President Anastasiades, was elected for a new term after winning the second round run-off with 55.9% of the vote. In the first round (28 January) President Anastasiades received 35.1% of the vote share against four other main opponents, thus triggering a second round vote. His main competitor turned out to be Stavros Malas -an independent candidate that was supported by AKEL (Progressive Party of the Working People), the Cypriot Communist party- who gained 30.3% of the vote. The second round vote thus became a re-run of the previous Presidential elections of 2013.
In the presidential system of the Republic of Cyprus, presidential elections are the most important and salient electoral events. The President exercises the executive power, forms the government which does not require a vote of confidence by the Parliament and his authority is often parallelised to that of a monarch (Chrystophorou 2008). The President is elected every five years independently of the composition of the Parliament which might or might not support the government in terms of its composition. The election of a President takes place in a two-round contest, unless a candidate secures over 50% in the first round, as occurred in 1983 and 2003.
Past electoral analysis (Triga 2016) indicates that the Cypriot ideological space is structured upon two well-known axes of political competition. The first concerns the regulation of the economy, the classic cleavage between left and right. The second axis concerns culture and identity issues and incorporates the so-called Cyprus problem. The Cyprus problem is understood as the long-standing de facto partition of the island into a southern Greek Cypriot and a northern Turkish Cypriot part following the Turkish invasion of the northern part of the island in 1974. Since then the Southern part of the Republic of Cyprus (RoC) has been the only internationally recognized state a fact that makes Cyprus the only EU member state with divided territory under military occupation.

The Candidates
Before examining the two central campaign issues, we shall introduce the five candidates that ran for the Presidency and the parties supporting them. The first candidate was the incumbent president, Nikos Anastasiades, a 72-year-old politician with a long political career. Anastasiades was leader of his centre-right party DISY (Democratic Rally) from 1997 until 2013. His candidacy was supported only by his party, DISY.
One of the incumbent’s main political opponent, Stavros Malas, a 50-year old doctor, was supported by the communist party of AKEL. Although Malas held a political position in the past as Minister of Health from 2011 to 2012 under the Christofias presidency (ex-general secretary of AKEL), he ran as an independent candidate.
The third candidate, presented in several opinion polls as the favorite to make it to the second round, was Nikolas Papadopoulos. Leader of the ‘centrist party’ of DIKO (Democratic Party), Papadopoulos was the 44-year-old son of former President Tassos Papadopoulos. The father was famous for his negotiation of the 2004 Annan Plan and his last-minute move just before the referendum on the Plan in which he advocated a rejection. Papadopoulos ran for the Presidency with the support of his party, DIKO, the support of the socialist party of EDEK (Unified democratic Union of the Centre) and that of a relatively new party of Solidarity (firstly appeared in the parliamentary elections in 2016).
The main reason for these parties to support the candidacy of Papadopoulos was his opposition to the notion of a bi-zonal and bi-communal federation as a solution for the Cyprus problem.
The fourth candidate was Giorgos Lillikas, an experienced politician and leader of Citizens’ Alliance party, a small, anti-establishment party that was also founded (2013) with the aim to instil change in the political system.
The fifth Candidate, Christos Christou (38 years old), was the leader of the far right party of ELAM (National Popular Front), the ‘brother’ party of the Greek Golden dawn. Christou was one of the two ELAM parliamentarians elected in the Parliamentary Elections in 2016.

The Campaign
Turning to the conflictual issues that dominated the long and rather dull electoral campaign, we firstly look at the Cyprus problem. The Cyprus problem is a classic cleavage that attracts more political attention at every new effort undertaken by a President seeking a solution. In the 2018 Presidential campaign, the unsuccessful negotiations of the incumbent during the previous summer of 2017 was one of main campaign topics.
The ‘failure’ of the negotiations was the focal point of political conflict among the candidates. All candidates, except for Malas, adopted a hard nationalistic line on the Cyprus issue. The major critique against Anastasiades came from the centre party Democratic party (DIKO) and its leader Nikolas Papadopoulos. During the campaign he adopted a rather aggressive and polarising tone in which the final target of the negotiations, the creation of a bi-zonal, bi-communal federation, was disputed. Pursuing a similar line, albeit with an even stronger rhetoric, the other two candidates, Lillikas and the extreme right-wing leader of ELAM Christou were against the way President Anastasiades dealt with the negotiations.
The second major issue of the campaign was the economy. One of the European countries hardest hit by the ‘Great Recession’, Cyprus was one of the bailout countries that uniquely included a “haircut” on bank deposits. Although this occurred only a few weeks after Anastasiades’ inauguration as Predident in 2013, his Presidency was still stigmatised by the ‘haircut’ of bank depositors, the closing down of a major bank and the imposition of capital controls. However, it was nonetheless within his five-year mandate that the economy also staged a remarkable recovery. Indeed, by March 2016 Cyprus formally ended its austerity program and since then crucial macro-economic indicators are advancing positively.
Not surprisingly, the Anastasiades political campaign focussed on the successful management of the economy, while the rest of the parties highlighted prevailing economic weaknesses and inequalities. Other issues discussed during the campaign concerned the management of the energy sector as well as corruption and scandals, which were mainly raised by the candidates of the opposition.

Results and discussion
The electoral results (see Table 1) in both rounds indicate that there are clearly winners and losers. Although President Anastasiades experienced a considerable loss of support, he nonetheless dominated both rounds and thus managed to renew his mandate for another five years. Another winner, despite his failure to be elected President, is the candidate supported by AKEL, Stavros Malas. He not only managed to make it to the second round but received an unexpectedly high vote share of just over 44%. In this sense, he brought back hope to the second largest Cypriot political party, AKEL, that had suffered electoral setbacks since the end of the Christophias presidency in 2013. Christophias has been widely perceived as having the main responsibility for the economic crisis.
Another winner can be considered the candidate of the extreme right ELAM, a party that emerged some years ago but is steadily establishing its presence in the Cyprus political landscape.
Undoubtedly the other two candidates Nikolas Papadopoulos and Yiorgos Lillikas are among the two big losers. The former for not managing to make it into the second round despite the positive polling forecasts while Lilikas –a candidate in 2013- saw his electoral support crumble.
The polarizing and hard narratives deployed by all candidates did not allow much space of coalitions for the second round, a phenomenon which is very common in Cyprus presidential elections. Hence no first round candidate or party that supported them endorsed the two second round candidates. The combined vote share of the two parties (AKEL and DISY) supporting the second round candidates based on the 2016 parliamentary elections was just over 55%.
The major issue that appeared to be the stumbling block for potential coalitions was the two second round candidates’ position on the Cyprus issue. All those who did not manage to get into the second round clustered around a hard nationalistic stance in contrast to Anastasiades and Malas who, despite their differences, both support the solution of a bi-zonal, bi-communal federation. One interpretation of the electoral result could be that Cypriot voters rejected the hard line of dealing with the Cyprus problem.
One notable feature of recent Cypriot elections is the rise in voters’ abstention. Despite the fact that the Presidential elections are the electoral events that attract the highest voter participation in Cyprus, we note a substantial raise in the levels of abstention in both rounds. This rising trend tends to be a rather problematic phenomenon in Cyprus politics and is associated with a generalised mistrust of political institutions, political alienation and cynicism triggered by unaccountability and scandals. Such a dynamic is also consistent with broader dynamics across the EU. 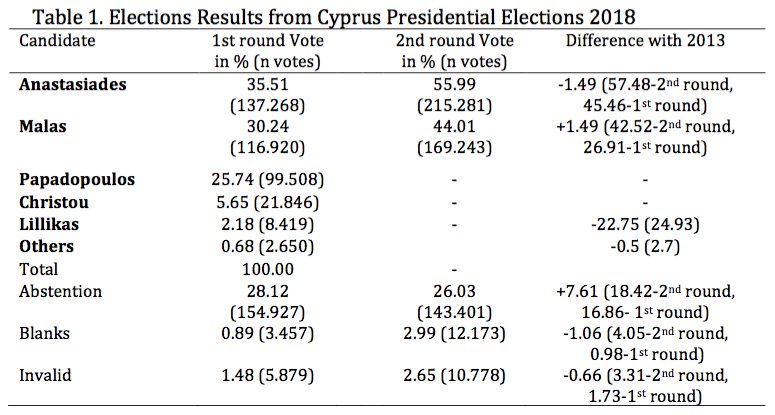 Source: Data compiled by the author from official results available from the Electoral Service (Department of Information and Technology Services) of the Ministry of the Interior.

Overall, the 2018 presidential elections in Cyprus highlights a return to normality after the turbulent times due to the past financial crisis. The latter has no doubt left its scars, as is common in many European countries hit by the ‘Great Recession’. The two scars can be detected in the increasing levels of abstention in a context where voting is mandatory and has hitherto been characterized by high levels of electoral participation. The second scar is the increasing support for the far-right ELAM. The latter seems to have effectively deployed its populist rhetoric to capitalize on public discontent and appears to be less and less a transient political actor.
The two issues that dominated the campaign, namely the Cypriot issue and the economy constitute, are the two formidable challenges that await the new president.