The Bundestag elections 2021 stand out in a number of respects. For the first time (with the exception of the first Bundestag election in 1949) there was no Chancellor seeking re-election. Furthermore, three parties were fielding a candidate for Chancellor. On top of that, the election took place during a pandemic, which, on one hand, had direct effects on the conduct of the campaign, and on the other, brought into focus people’s crisis management capabilities.
These special features, coupled with Angela Merkel bowing out after 16 years in the Chancellor’s office, the global challenges of climate change and the resulting need for a social and ecological transformation of the economic system made the 2021 Bundestag election into something of a choice of direction.
Who will be entrusted with the leadership of the government in these uncertain times? Who will lead Germany out of the Covid-19 pandemic and take the necessary steps to ensure prosperity and social cohesion in the country going forward?

The Bundestag elections of 2021 represent a turning point, constituting a historic reset. The Social Democratic Party of Germany (SPD) is back and will be the strongest party in the German parliament going forward. The party’s success in winning 25.7 per cent of second votes is closely linked to SPD candidate for chancellor Olaf Scholz. The era of Angela Merkel, by contrast, has come to an end with the conservatives worst ever defeat, at 24.1 per cent. The union of CDU/CSU lost 8.9 percentage points in comparison with the 2017 Bundestag elections. Although the Greens, with 14.8 per cent, achieved their best ever result, by coming in third they failed in the goal they set themselves of taking the chancellery. The liberal party FDP takes fourth place, with 11.5 per cent of second votes, a slight improvement (0.7 percentage points).
The time is over – or at least only barely imaginable – when parties with 40 per cent of the votes could govern with a junior partner. The result of this election entails a new coalition arithmetic. Given that the party leaderships of the Union and the SPD have ruled out continuing the Grand Coalition the next government will be a tripartite alliance. The SPD, as election victor, has received a clear mandate to form the next government. The first ‘traffic light’ coalition in the Federal Republic will be a coalition of election winners, because all three parties – SPD, FDP and Greens – made gains.

Armin Laschet, however, the conservatives’ frontrunner, despite his obvious defeat, has so far continued to claim that he is entitled to form a government and is trying to cobble together a ‘Jamaica’ coalition. Dissenting voices are increasing even within the Union camp, however. In a direct comparison of the Union and the SPD the surveys yield clear results: 50 per cent of those asked preferred an SPD-led government, with only 29 per cent wanting the Union in charge.

The SPD won people over with both their programme and their candidate
Concerning possible reasons for voting it is clear that the SPD has emerged from the election campaign as the strongest party on the basis of both its candidate for chancellor and their policy programme. If the Bundestag election was a direct election of the chancellor, Olaf Scholz would have been the clear victor.
With 45 per cent Olaf Scholz is well ahead of the two other main frontrunners, Armin Laschet (Union) and Annalena Baerbock (Greens), whom only 20 and 14 per cent of voters respectively would directly elect. In July the national trend for the candidates of both the SPD and the CDU/CSU was still level pegging (29 per cent Scholz as against 28 per cent Laschet), while the Green candidate had already fallen back into third place, on 18 per cent. By August, however, the Deutschlandtrend survey was registering a significant shift. The survey was conducted after the disastrous flooding in western Germany, so there is a clear connection to the candidates’ values. Laschet’s approval fell to 20 per cent, while that of Scholz rose to 35 per cent, while Baerbock fell back slightly to 16 per cent. At that time the majority of those asked (35 per cent) still favoured the CDU/CSU to lead the next government (SPD 25 per cent and the Greens 16 per cent). Over the ensuing weeks, however, not only did Scholz’s approval rating rise in response to the direct ballot question, but his party went up a few notches on the question of which party should lead the next government, with the mood turning in their favour. They now stood at 38 per cent, with only 28 per cent favouring a government under CDU/CSU leadership (Greens 14 per cent). This shows that not only the SPD’s candidate, but also the party as a whole was able to win over the voters in the final weeks before the election.

This also becomes evident when considering the issues that people saw as most important in the 2021 Bundestag election campaign, as well as the competence attributed to the various parties. For example, a survey conducted by the Civey Institute in the run up to the election asked people what three issues were likely to influence their voting the most. The main issues, cited by 56.3 per cent of respondents, was pensions and social security, followed by environmental and climate policy, on 46.2 per cent, and the economy and jobs, on 39.1 per cent. 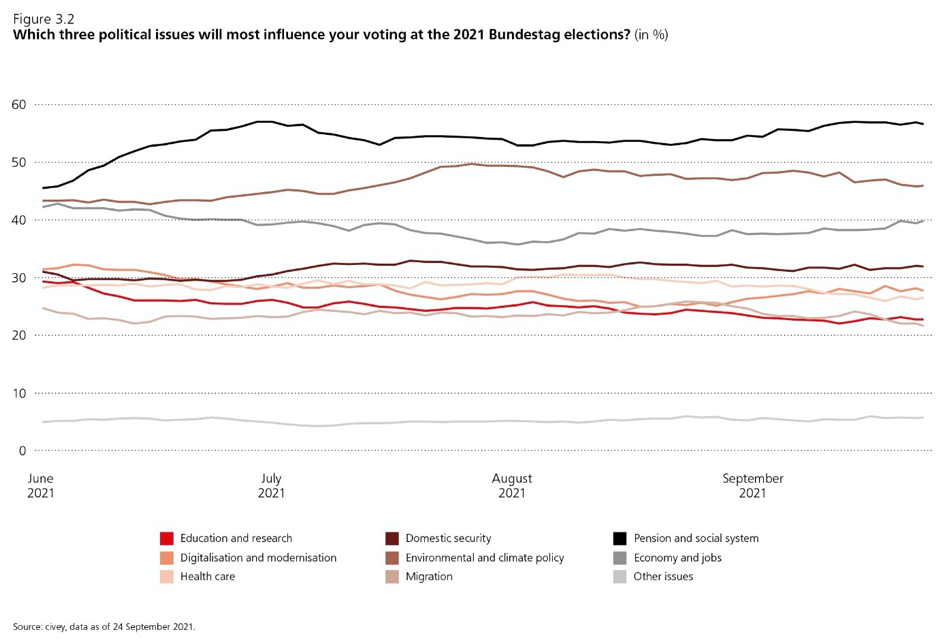 When it comes to party competence, it is evident that the SPD is well ahead on these issues, with the exception of environmental and climate policy and, to a lesser extent the economy as distinct from jobs. On the issue of old age provision (SPD 36 per cent, CDU/CSU 20 per cent, Greens 4 per cent), health care (SPD 33 per cent, CDU/CSU 24 per cent, Greens 9 per cent), family policy and child care (SPD 32 per cent, CDU/CSU 18 per cent, Greens 19 per cent), as well as social justice (SPD 40 per cent, CDU/CSU 15 per cent, Greens 7 per cent) substantially more people have confidence that the SPD will be able to tackle the upcoming tasks. On the topic of environmental and climate policy, by contrast, just under half of those asked (48 per cent) stated that the Greens are best able to cope with the challenges ahead, while the SPD (13 per cent) and the CDU/CSU (12 per cent) score much lower on this issue. By contrast, 44 per cent of respondents trust the SPD to ensure decent wages, with as few as 16 per cent feeling the same way about the CDU/CSU and a mere 5 per cent the Greens. On the three main issues the CDU/CSU were ahead only on the economy, with 32 per cent, while the SPD wasn’t too far behind, on 25 per cent, while the Greens received a lowly 6 per cent. The FDP receives it best rating on this issue, at 16 per cent, enabling it to score points even beyond its own constituency.
The SPD’s election victory thus derives from the high personal approval ratings of candidate Olaf Scholz and much higher competence ratings on most of the issues that people found important in this election. These observations, emerging from pre-election polling, have been confirmed by post-election surveys, insofar as 44 per cent of SPD voters stated that they had voted on the basis of its election programme, while 36 per cent did so because of the party’s candidate.

Won over by the whole package: So the SPD’s electoral success was by no means solely down to the mistakes of the Union and the Greens. The SPD, on a steep learning curve, was able to put the painful experiences of the 2017 elections to good use and even reverse the trend. Starting with their early nomination of the candidate, followed by the inclusive process of drafting the manifesto, and the party leadership’s success in uniting both wings of the party the SPD managed to present itself as strong and decisive.

A new start – but based on experience: As the Merkel era comes to a close many asked themselves for the first time: who could be chancellor apart from Angela Merkel? Just under two-thirds want a chancellor who represents a new day. At the same time, two-thirds want it to have experience of government. From the voters’ standpoint, Olaf Scholz fits this profile perfectly. As Vice Chancellor he represents continuity, while in terms of the issues raised in the election campaign – minimum wages, pensions, housing and climate protection – he also stands for a new start for many people.

Note: This post is based on a longer report published by Friedrich-Ebert-Stiftung
Photo source: https://www.politico.eu/article/spd-wins-german-election-cdu-close-second/