Ireland has a bicameral parliamentary system, with the lower house of parliament, Dáil Eireann comprising of 160 TDs (Teachta Dála or members of parliament) including that of the normally non-voting Ceann Comhairle (Chair of Dail / similar to the position of Speaker in the UK parliament), thereby the formation of a government requires a minimum majority of 80 votes.
The most recent Irish general election was held on the 8th February 2020. The outgoing minority government was led by Fine Gael and held office under a confidence and supply agreement with the second largest party in the state Fianna Fáil. The election results gave no party a majority. The Sinn Féin party claimed victory because they received the highest percentage of first preference votes (24.5) and gained 14 seats, bringing their total number of TDs to 37. Fianna Fáil who with 22.2% first preference votes won 38 seats (-6) were initially the largest party, but the subsequent election of one of their TDs to the position of Ceann Comhairle, means they have an equal number of votes with Sinn Féin. The Fine Gael Party was the biggest loser in the election on 20.9% first preference votes and 35 TDs, the party lost 15 seats. The remaining 50 seats are divided between 4 small parties and a large group of independent deputies (20). The election outcome is argued by Sinn Féin to be a clear mandate for their party, a rejection of incumbent government and its ‘confidence and supply’ agreement with Fianna Fáil and a vote for change.

Table 1. Distribution of First Preference Votes and Seats of Parties in 33rd Dáil 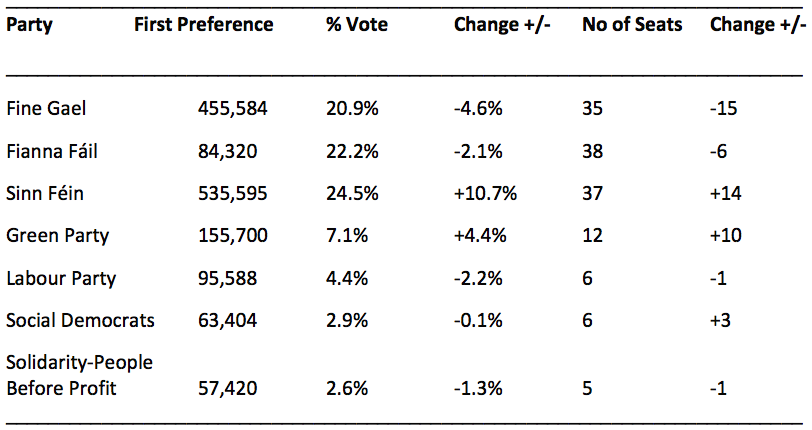 Very soon after the election it became clear that Sinn Féin would not be able to form a government, without the cooperation of one of the other two large parties. However, both Fianna Fáil and Fine Gael had made election pledges not to coalesce Sinn Féin. At the same time both parties have, since the civil war (1922-23) been formidable rivals, alternating the reins of power between them since the formation of the state. In the initial weeks after the election each of the larger parties seemed more eager to be in opposition than in government. The covid-19 pandemic changed the dynamic and increased pressure on the parties to engage. This engagement culminated this week in a truly historic turn of events, the two rival parties of Fine Gael and Fianna Fáil have issued a joint statement expressing their commitment to work ‘as full and equal partners’ to try to form a stable government. The policy document is proposed as the basis of a future programme for government and as a framework for coalition talks with smaller parties and independents, as the two parties’ combined seat total of 72 seats falls well short of the 80 seat minimum majority required.
The economic reality of a €19.2bn Central Bank predicted exchequer deficit by the end of the year is one explanation why none of the smaller parties have been showing much enthusiasm for such a coalition. The Green Party (12 seats) are insisting that a national unity government is the best option, while the newly elected leader of the Labour Party (6 seats) believes opposition is the right place for his much-reduced party. Meanwhile the Social Democrats (6 seats) remain reluctant to engage and the Solidarity People Before Profit party (5 seats) are firm in their refusal to coalesce with either Fine Gael or Fianna Fáil. Finally, there are a group of 20 independents who may be needed in addition to a smaller party but are not regarded as a stable enough option for coalition on their own.
If nothing the Covid-19 crisis has highlighted the importance of context in the formation of coalition governments. Alliances previously unimaginable are now on the table and the agreement of a policy framework is a significant step on the road to coalition government formation. The framework document indicates ’10 missions that all centre on the wellbeing of Ireland’s citizens’, thus indicating a significant turn away from the previous government’s centre right policy of austerity towards greater state intervention. In addition, recent opinion polls suggest a significant increase in support for Fine Gael to most popular party. Although the same polls indicate Sinn Fein is maintaining its electorate support, only last May the party lost almost half its seats in the local elections. Vote swings that could be seen as much as an indication of the volatility of the current Irish electorate as they are a sign of a shift to or from specific political parties.
To achieve a new government the leaders of Fine Gael and Fianna Fáil must sell their proposed deal to their membership and then agree a programme for government with at least one other smaller party / group. The former has now been agreed in principle but there is no guarantee that a stable coalition partner will be found. The Independent TDs have organised themselves into three technical groups: The Rural Independents (6), the Regional Independents (8) and the Independent Group (6). Registration as a technical group is a mechanism that allows independent TDs Dáil speaking allocations and access to Oireachtas Committees. These groupings also provide platforms for coordinated talks on government formation. However, FG have indicated their insistence for a third party in any future coalition to ensure stability. Talks with the smaller parties have commenced in a week where the Department of Finance’s update on the economy is projecting a 10.5% drop in Ireland’s GDP and unemployment to peak at 22%. The Social Democrats have indicated an ideological reluctance to enter into a coalition with FG, the Labour Party too is reticent to take part in a government. The greatest pressure is currently on the Green Party to engage in talks and they have committed to respond to the Framework Document in writing by the end of the week. In effect negotiations have only just begun and the deputy leader of FG has suggested that agreement may take months rather than weeks. The alternatives that the country could form a coalition government stable enough for five years or that it could be looking at another election remain very much dependent on the outcome of negotiations in the coming weeks.