By Roderick Pace (University of Malta)

The snap election held in Malta on 3 June 2017 has reconfirmed the incumbent Labour Party in government for the next five years with a resounding popular majority and a projected nine seat majority in the National Parliament.
Labour Leader Joseph Muscat took the oath of office as Prime Minister on Monday morning, while the entire leadership of the Nationalist Party, including its leader Simon Busuttil, handed in their resignations adding that they would not be re-contesting the positions they were leaving.
It was on 1 May 2017, that the Maltese Prime Minister and leader of the Labour Party, Joseph Muscat, announced that he was going to ask the President of the Republic to dissolve parliament to open the way for a general election to be held on Saturday 3 June. General elections in Malta are normally held every five years and the next one was due in 2018.

[1] Although rumours that an early election would be called in 2017 were rife in the weeks preceding the announcement, the prevalent expectation was that it would be left to wait until Malta had completed its turn at the six-month presidency of the Council of the EU at the end of June.
Several factors may have influenced the Prime Minister’s decision to call a snap election, but primarily the fact that the economy was performing well, leading to a general ‘feel good’ factor among voters, which was in turn positively reflected in several opinion polls.
In this respect, it is noteworthy that in April of this year unemployment in Malta stood at 4.1%, well below the EU-28 average of 7.8% and less than half the 9.3% average of the Euro Area.[2] The economy is growing rapidly with real GDP expansion of 4.5% in 2013, 3.5% in 2014 and 6.2% in 2015.
In the meantime, the Opposition led by the Nationalist Party was mounting pressure on governance issues based on revelations made in the Panama Papers published in April 2016 by the Washington based International Consortium of Investigative Journalism (ICIJ) and allegedly involving officials close to the Prime Minister amongst them one cabinet minister. Many of the allegations are sub-judice and the subject of judicial inquiries. The Labour Party may have also calculated that a snap election would put-paid to any attempts to erode its electoral support.
Governance issues dominated the Nationalists’ electoral campaign, but the election result shows that the electorate has given more importance to economic well-being.
When the polls closed on Saturday night, action shifted to the central counting hall in the town of Naxxar where the ballot papers were sorted and the laborious process began of allocating the votes to the candidates according to the preferences expressed by voters. The first indicators of a Labour victory were made public at about 10.30 am on Sunday morning and soon after the Leader of the Opposition conceded defeat.
Figures released by the Electoral Commission (Table One) showed that turnout at 92.1% was a little less than one percentage point below that of the 2013 election which was 93%. Turnout has been declining since peaking at 95.7% in the 2003 election when the main issue was Malta’s EU membership.
The results show that both the Labour Party and the Nationalist Party managed to increase their vote tallies with respect to the 2013 election, but the vote difference separating the two parties was 35,280 only marginally above the 2013 figure.
The small parties squeezed between the two major parties fared very badly and the votes obtained by Alternattiva Demokratika, the green party, were slashed by more than half. Alternattiva had refused to join the Nationalist-led “Forza Nazzjonali” coalition.
In keeping with the pattern of past elections, the 2017 election was strongly contested by the two main political parties the only ones represented in the Maltese Parliament since 1966. On the one hand the Labour Party led a positive campaign basing its claims for another mandate on the stellar performance of the economy and the need to maintain the economic momentum in the future. The Nationalist Party at the head of a coalition of newly formed miniscule parties called “Forza Nazzjonali” led by Simon Busuttil, focused its gunfire on allegations of corruption in the governing party, many of which are the subject of judicial inquiries. These allegations have raised serious concern among several people from all sides of the political divide as well as leading economic sectors, but it was not sufficiently strong as to entice voters to change their allegiance to the Labour Party and switch to the Nationalist Opposition. 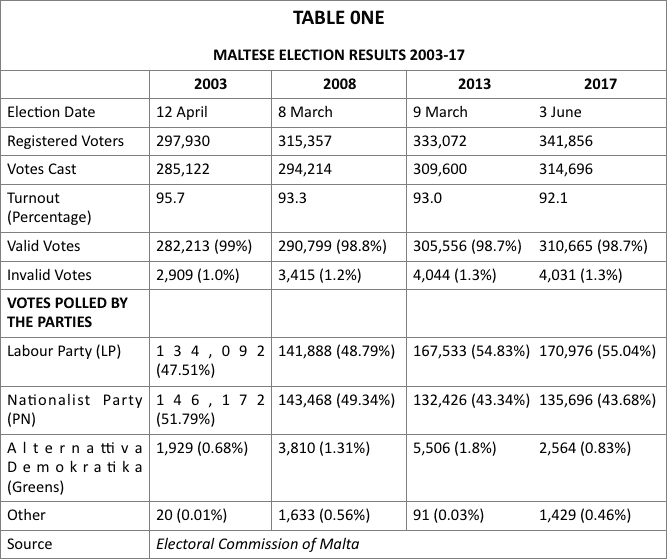 From the start of the campaign, public opinion polls gave the government and Prime Minister Muscat a comfortable lead over their rivals. Surveys published by the newspaper Maltatoday during the four-week campaign and summarized in TABLE 2 are indicative of voters’ mood. However, no poll predicted the extent of the final outcome and the heavy defeat suffered by the Nationalist Party. A generally held opinion was that Labour would win but with lesser votes.
During the campaign which lasted just four weeks, the leading Maltese independent newspapers were critical of the government. They certainly did not give it the benefit of doubt on the issue of governance. However, as in the 2013 election the main information and propaganda battles took place on the electronic media, primarily television and the internet. According to a survey among voters carried out by the Malta Independent on Sunday, 76.9% said that they followed the campaign on television, 53.2% on the social media, 27.2% on radio, 18.8% on the newspapers, 17% via news portals while 5.1% said they did not know.
The two main political parties have their own television and radio stations as well as newspapers, but they also made their presence felt in the social media and the internet. Political advertisements popped up on popular sites and social media such as Facebook and Twitter. Throngs of commentators from all parties reacted to reports on news portals by repeating the well-known party lines, giving the impression that these were less likely to have been spontaneous in nature and more likely to have been organized by political campaign leaders.
Both the Labour and Nationalist Parties organized public meetings which were addressed by the respective party leaders. Speakers from allied European parties were invited over to endorse and provide a stamp of approval to the respective campaigns. Former Italian Prime Minister Matteo Renzi addressed the Labour meeting on Sunday 28 May, while the German MEP Manfred Weber addressed the Nationalist Party meeting held in Sliema on the same day. 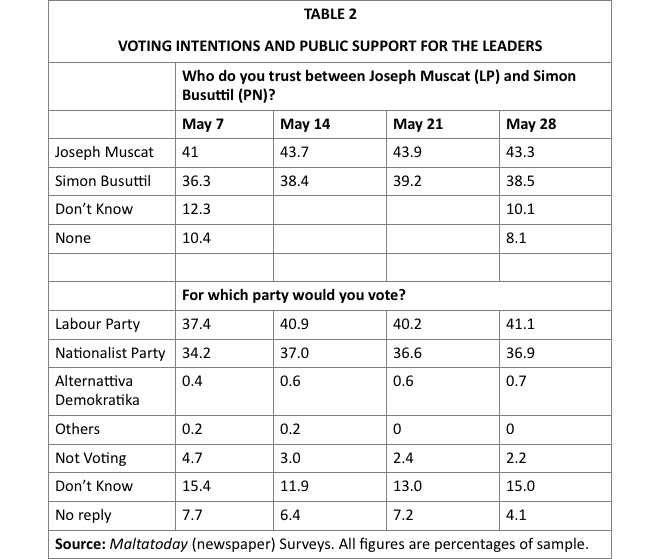 352 candidates contested the election, compared to 267 in 2013, of which 73 (21%) were women. Forza Nazzjonali fielded 174 candidates to the Labour Party’s 119, and had twice the number of women candidates compared to Labour.
The Electoral System
In general elections, the Maltese islands are divided into 13 electoral districts of more or less equal size, one of them being the island of Gozo which has a population of 31,592 (in 2014). Voting is based on the single transferable vote. Candidates and independents are listed on a single ballot sheet in alphabetical order and grouped by party affiliation. Voters mark “1” in a space against their preferred candidate and may continue to give as many other preferences as they wish (2, 3…etc.), even crossing party lines.
Five members of parliament (MPs) are elected from each district. A candidate is declared to have been elected to Parliament once he/she achieves the “quota” which is established for each district by dividing the valid votes cast in that district by six and adding one to the result. The small differences in size between the electoral districts and the fact that ‘unused’ or ‘extra’ votes in one district (as they are colloquially referred to) are not transferable to a national quota, makes it possible for a party whose candidates poll less preference votes on aggregate than their rivals, actually electing more MPs.
Since 1987, a Constitutional provision has been operational to avoid this anomaly by ensuring that at any general election, when a political party obtains more than 50% of all the valid votes cast, or at a general election in which only candidates of two parties are elected, a political party obtains a percentage of all the valid votes cast which is greater than that obtained by the other party, the number of parliamentary seats are increased to give it a majority. The Constitution also establishes that when the share of parliamentary seats elected by the minority party is less than the share of votes it obtains in the election, than it is entitled to additional seats to ensure proportionality between the votes it obtains and the number of parliamentary seats allocated to it. These provisions do not operate in the event that more than two parties are elected to Parliament. In such a hypothetical case, the number of seats won by each party remains unchanged (art. 52 of the Maltese Constitution).
This constitutional provision ensures that an election will always return a parliamentary majority and that proportionality between votes and parliamentary seats is ensured. It means that it matters enormously where voters place their first preference. For this reason, many voters give the first preference to the candidate heading their preferred party list on the ballot sheet and continue to allocate the rest of their preferences down the list. This gives an advantage to candidates whose surname puts them at the head of the list.
The absence of a national threshold makes it difficult for small political formations to enter parliament. A party needs to elect at least one seat in a single electoral district to enter parliament. In the 2013 election, Alternattiva Demokratika polled 5,506 in aggregate from all the 13 districts, which was well above the individual “quota” in each of the districts, but this did not entitle it to a parliamentary seat. In addition, the rivalry between the two main political parties and their party organizations tend to make it more difficult for the smaller parties to enter parliament. On the one hand this ensures stable government, but strengthens polarization and precludes coalition governments.