Rajoy’s new government in Spain: a cabinet designed to last

After ten months of caretaker government, Spain has a new executive, again with Mariano Rajoy (leader of the conservative Popular Party, PP) as prime minister. Over the last year, Spanish politics has been revolving around the enormous difficulties to form a government, despite of multiple possibilities of party coalition. The 2015 December general election left a fragmented Parliament. In this context, there was no clear combination of parties, since none of them had enough seats to form a single-party government, and the incentives to form a coalition were very low. The PP –the incumbent party- remained as first electoral force with 123 seats, but far from the 176 needed to form a majority government. The main alternatives to the PP were a traditional mainstream party, the PSOE with 90 seats, and two new parties such as Podemos (with 69 seats, including their regional electoral partners) and Ciudadanos, with 40 seats but none of them succeed reaching a government agreement. After Rajoy’s refusal to attempt to form a government, the PSOE took the lead and managed to get a formal agreement with Ciudadanos, but they failed to get in board other political parties like Podemos. The unfruitful bargaining lead to deadlock, and eventually forced to call for a snap election again only six months later.

Hence, in June 2016, a new general election was held in Spain. Although the results did not divert excessively from the previous election, this time the PP increased its number of seats up to 137, while the parties from the opposition had a worst result (the PSOE lost 5 MPs, the coalition by Podemos and IU kept its original 71 seats, and Ciudadanos also reduced their representation in 8 seats. Indeed, there were not many differences between the two elections in terms of seat allocation. This time, there was stronger social pressure to reach an agreement and form a government. After a formal agreement by PP and Ciudadanos in August, all the pressure went to the PSOE, which fuelled an internal plot to oust the party leader, Pedro Sánchez, and substitute him by an interim executive committee. Sánchez’s fall obeyed to the refusal by the main party factions to allow a left coalition with Podemos leaded by him. Amid this turmoil, the PSOE finally accepted to let Rajoy governing in minority. Besides, Podemos is also involved in an internal debate about its organisational and political strategy. In this context, the Rajoy’s minority government might face difficulties to implement new cuts and reforms to curb the deficit and to respond to the EU policy queries, but it may also benefit from a weak, divided opposition. 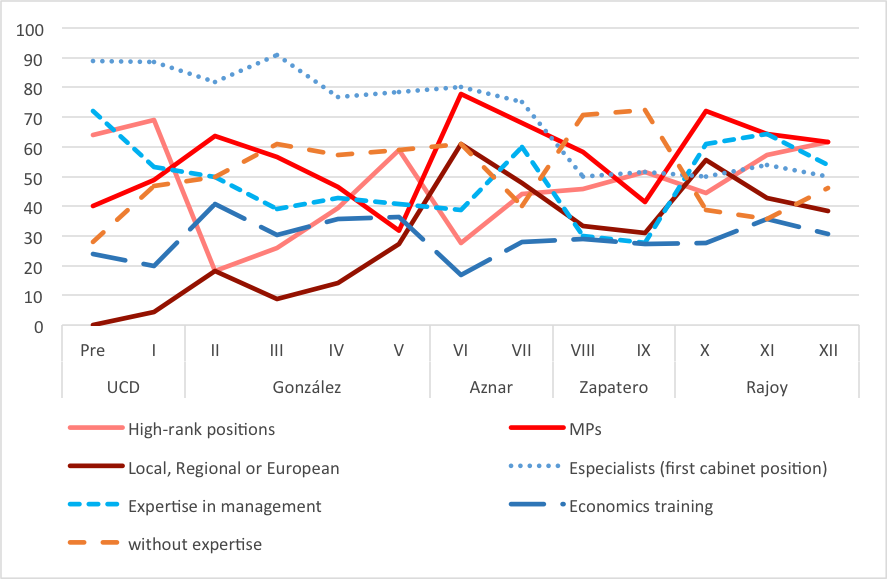 In this context, the formation of the new cabinet shows the priorities of the prime minister, and how he expects to deal with the minority status in the parliament. The general portrait of the new cabinet shows much more continuity than change, even though Rajoy has had a similar rate of ministerial renewal than Aznar or Zapatero in their first term. Moreover, the new cabinet has a strong political profile, although most of them are not senior party leaders. As Figure 1 above shows, the level of expertise and specialization is somewhat low among the Ministers, as only half of them have any previous professional or political expertise in the areas or their portfolios. Only one third of them have economics training combined, in some cases, with public management experience or private sector experience.

It is quite common among Spanish Presidents to form cabinets with higher amount of members with high rank executive positions in the Public Administration experience than parliamentarians. This new government is an exception, since members with only parliamentarian experience and members with former high-rank position experience are present in the same percentage. This suggests that the composition of the cabinet has been designed to assure the right management of some sensitive areas like Europe or Economy while balancing the distinct internal factions and paying some political favours. 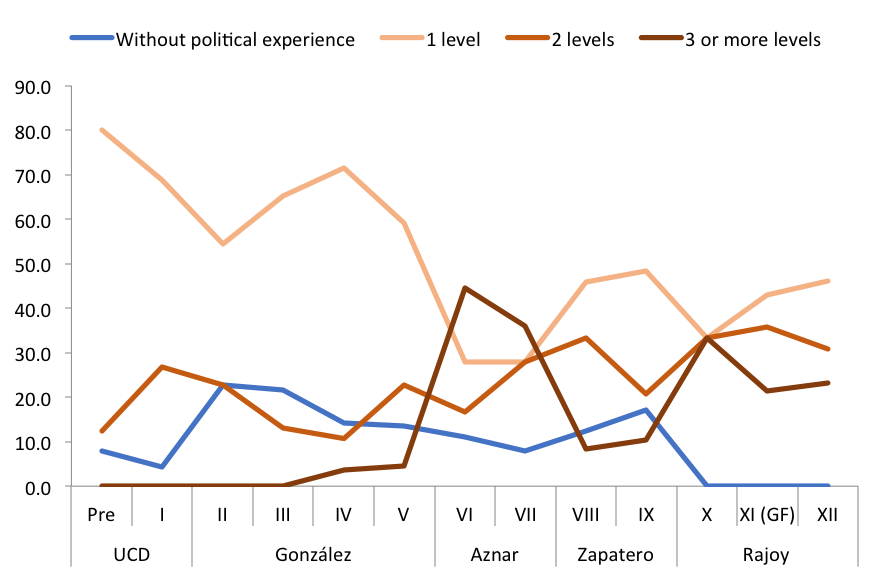 It is important to mention as well the presence of members with previous political experience in other levels of government, almost 40% as observed in Figure 1, which matches the increasing relevance of the rest of governmental levels in Spanish politics, following the trend of other European multilevel countries. Rajoy, as Aznar did in the past, has included several Ministers with multilevel political experience. Figure 2 above considers the evolution of the number of political level experience (measured as the amount of different institutional levels where the individual has had any parliamentary or cabinet experience). Accordingly, one in four cabinet ministers has hold an office in at least three levels of government or even more if we distinguish among high rank positions, national parliament, regional government and parliaments, local and European level.

Even though most of the members of the actual cabinet are not relevant figures of the Popular party, the increase of presence of members with multilevel experience suggests that this is a politically relevant cabinet. It also indicates the ability of the PP to reward its successful politicians in other political levels. Indeed, Rajoy is employing cabinet appointments also as a tool to renew the party elite, by promoting local and regional politicians to the national political arena. This portrait suggests that the PP has been more pragmatic than other political parties like PSOE in taking benefit from the multilevel structure of opportunities for career politicians. The PSOE’s regional leaders had traditionally less chances to achieve the national party leadership (and tended instead to be a counter-power to the national party chairmen), the political careers of PP leaders have been more transversal across different layers, moving up and down depending on the opportunities offered by the Spanish multilevel system.

The new Rajoy’s cabinet could become an excellent training pool for the next electoral cycle. Indeed, some of the members of the executive could become regional candidates in the 2019 regional and local elections. Some of them could even aspire to challenge the incumbent prime minister. Contrary to what many analysts are suggesting (regarding an eventual snap election next year), the new Rajoy’s team will be very much interested in prolonging the duration of the term until 2019. In this sense, as Bonnie Field has recently argued, we may expect from Rajoy’s ministers to take advantage of the government institutional and political tools to promote or block issues on the agenda to attract temporary support of the multiple formations in parliament to the different bills discussed along the brand-new parliamentary term.