‘Return to Normalcy?’ The 2021 Legislative Elections in the Republic of Cyprus

The Republic of Cyprus is the only state with a presidential system in the EU. The House of Representatives is constituted by 56 Greek Cypriots and three observer members of the Latin, Armenian, and Maronite communities. In theory, 24 seats are reserved for the Turkish Cypriots which reflects the consociational nature of the constitution, however, Turkish Cypriots do not actively participate in politics of the Republic of Cyprus because of the protracted Cyprus conflict. On 30th May 2021 Sunday, amid a continuing battle against the COVID-19 virus, 63.9% of 557,589 eligible voters went to the polls under strict health protocols (down from 66.7% in 2016 legislative election) to elect their representatives for another 5 years. Votes were casted in 6 different districts; 20 seats available for candidates in Nicosia, 12 seats in Limassol, 11 seats in Famagusta, 6 seats in Larnaca, 4 seats in Paphos, and 3 seats in Kyrenia.

The context
Although, Cypriot presidents do not face votes of confidence, they need the support of a majority in the House of Representatives to legislate according to their political agenda. So, legislative elections directly impact both the legislative and the executive structures and dynamics. Before the election, polls predicted incumbent President Nicos Anastasiades’ Democratic Rally (DISY) to win by a slight margin over the Progressive Party of the Working People (AKEL). The Open-list Proportional Representation system with a 3.6% electoral threshold combined with shaken but not destroyed cleavages suggested that the relative power of the political parties in the House of Representatives would not be hugely disturbed and coalition politics would continue to be the norm. However, similar to the trend in most European countries over the last decade, there was a serious threat of far-right increasing its vote and even stealing a seat or two from DISY. National Popular Front’s (ELAM) candidate Christos Christou received 5.7% of the national vote in 2018 presidential election and the party was expected to receive an even higher share of the votes according to the polls.

The campaign and results
Before the election, all candidates emphasized the importance of the usual suspect, ‘The Cyprus Problem’ without delivering any feasible plan to solve it. Also, corruption was another highly salient issue partly because of the ‘Golden Passports’ scandal, in which an undercover investigator from Al Jazeera had the president of the House of Representatives Demetris Syllouris (DISY) and another representative Christakis Giovanis (AKEL) on tape, offering help to a fictional Chinese businessman who has a criminal record to obtain the Cypriot passport in return for a generous ‘investment’ in real estate in Cyprus.
On the election eve, there was no reason to celebrate for political parties except for Democratic Alignment (DIPA) and ELAM. This election was DIPA’s first. DIPA is a new party formed in 2018 under the leadership of Marios Garoyian together with dissidents from the Democratic Party (DIKO). They chose to use the old name DIKO had used in 1976 legislative elections, offering a ‘real’ centrist option for Cypriot citizens, a promise which seem to have found an audience among the public. DIPA might have a chance to differentiate itself from the ‘flash parties’ of 2016 legislative election; Citizens’ Alliance (SYPOL) and Solidarity Movement (KA) which combined for 11.3% of the vote. These parties’ votes could be explained by dissatisfaction with the economic catastrophe which resulted with a bail-in agreement in 2013. Although it is still early to predict without uncertainty, DIPA might find a place in the party system for the years to come.
It was expected that DISY and AKEL would lose votes after the major Golden Passports scandal. In the case of AKEL, the party still could not have the general public totally disassociate itself with the economic crisis of 2012-2013. In the case of DISY, the time has probably arrived for the party not just to bank on the promise of ‘return to normalcy’ after the economic crisis. High number of COVID-19 infections and deaths, combined with corruption scandals, and a lack of a solid plan for economic development started taking its toll on DISY’s prospects in elections. The major parties losing votes, however, has not been a good thing. A look at table 1 which provides a comparison of vote shares between 2021 and 2016 legislative elections suggest that there is a reason for concern about the rise of the neo-fascist party ELAM. It is the only party which significantly increased its votes (from 3.7% to 6.8%). 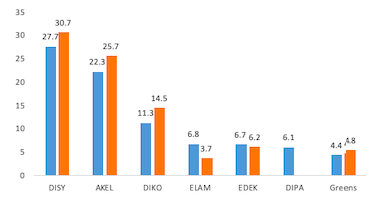 The aftermath
So is there a ‘return to normalcy’ after the 2016 legislative elections which witnessed protest vote and a brief ‘threat’ to the traditional party system of the Republic of Cyprus? No. In fact, it was expected that small parties like SYPOL and KA would disappear as they did not offer anything ideologically new, nor they offered any systematic policy agenda. But ELAM and maybe also DIPA are different than these parties. Although, it is too early to predict, DIPA might turn into the first Liberal party of Cyprus in the House of Representatives if it can offer a consistent agenda formed by Liberal policies. ELAM, on the other hand, is not a newcomer. It is consolidating its place in the party system and starting to become a real threat to parties like DISY and DIKO. This election showed us that the dynamics of the Greek Cypriot party system is moving into turbulent times and the next legislative elections in 2026 could provide evidence for this.